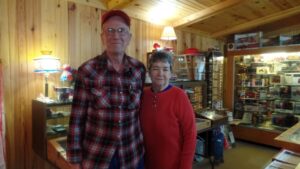 Wayne and Betty Hutton have an amazing International Harvester Museum located on their farm just on the edge of Clarence, Missouri.

Wayne had collected the larger tractors and implements in his collection, but Betty is the one who got Wayne started in the memorabilia collection and they have a great collection of both. By walking into their home and the sheds you can see that they have saved and revived numerous red International Harvester items both big, small, and rare.

Betty recalled one deal that got away when they were first collecting items. When they were still dating, they were attending the Mount Pleasant, Iowa Old Threshers back in the day when there were hay wagons full of junk and antiques. Betty picked up an item and wondered to herself why someone would do that to a gas cap. After collecting for a while, she did come to find out that IH made a cookie cutter. At some point Betty found another one and it is now in their collection. In their collection they have a U.S. International Harvester M1 Garand rifle which is not the one Wayne carried but it is just like it while serving as an MP for the United States Army during the Vietnam Era. At an earlier time in life Betty lived in Canton, IL. Canton is the home of Canton Works—which became the world-famous International Harvester Company Plow Factory– The first steel plow in Canton was made by William Parlin in this foundry in 1842. Betty has a bulletin board from the plant and many of the service pins that were awarded to employees. 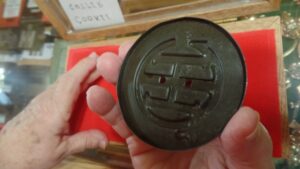 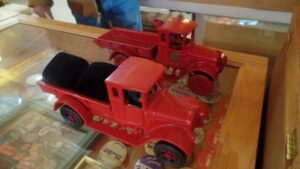 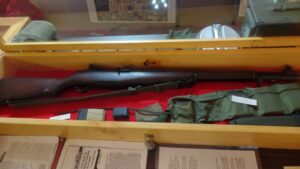 Both have a knack for spotting the International items at auctions, antique shops, flea markets, and sometimes people know what they collect so they call them up to see if they want to buy an item. On one occasion they came home, and an International Harvester jacket was hanging on one of the shed’s doors.

A rare item is a Red Baby dump truck made by Arcade in Freeport, IL. Wayne can tell you a lot of history on their collection and when this truck was new it sold for 99¢. A friend of Betty’s gave them an IH kangaroo which was an Australia Corporate award. Probably the rarest item they own is the only 1950 Experimental M. The M came from Burr Ridge which is the Experimental Farm in Hinsdale, IL. After all testing was completed on these tractors they were meant to be disassembled and destroyed. Their M is the only one that survived. Wayne has a wealth of knowledge about this tractor on what worked and what did not. 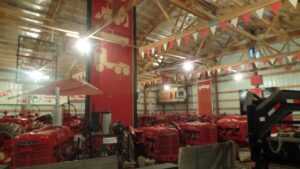 Wayne and Betty are each Founding Members of the Missouri Chapter 1 International Harvester’s Club joining in 1992. They have been featured in Successful Farming in 1991, Missouri Ruralist in 1995, and Missouri Farming Today in 2008. Wayne suffered from a heart attack shortly after his interview in 1991. Since 1990 they have attended every Red Power Round Up to date with a nice display of the pins from each one, they are in hopes of making it to Pennsylvania this summer.

Wayne and Betty have a lot to celebrate in January Wayne has a birthday on the 20th and on January 19th of this year they are celebrating their 25th wedding anniversary. Wayne and Betty have two children a daughter Audrea Anderson of California and a son Troy Carlyle who passed away in 2010. They also have two grandchildren and one great-grand-child.

If you ever get to Clarence be sure to call the Hutton’s for a tour, it will be well worth your time. For more photos of our tour, see http://showmeihc.com/wayne-betty-hutton-ih-enthusiasts/.

We are still having problems with change of address when members move and a BIG problem with the SNOWBIRDS who don’t let us know when they head south for the winter or come back home in the spring. Some Members think the Highlights will automatically forward, But it will not. If you move, notify both MO and Emmett Webb. If you go south, notify Emmett. Emmett Webb, PO Box 35, Dublin, IN 47335-0035 E-mail at ihcclub@aol.com Thank you!

Here it is mid-February and winter still seems to have a tight hold on us. The groundhog didn’t see his shadow, but I believe winter is going to be around for a while, I guess it’ll make spring a lot more welcome.

Our Christmas dinner in Pilot Grove was well attended and we had a great meal, thank you to Miles Wolfe for getting things lined up for the dinner. At the meeting it was decided to donate $500 to the IH Collectors Trust and also the location of the 2021 state show was awarded to the Missouri River Valley Steam Engine Assn. in Booneville.

The next national event will be the Winter Convention in Kalamazoo, MI hosted by MI Chapter #11. I hope everyone can plan to attend as it should be a good convention hosted by great people.

Please keep these folks in your prayers, our merchandise chairperson Penni Weiss is recovering from knee replacement surgery with some other complications and Joey Perkins the husband of our former membership secretary, has been diagnosed with Multiple Myeloma and is taking treatments. Also, director Ron Strange and his wife Linda, all these folks are a big part of our organization.

Our next membership meeting will be held March 16th in Springfield, MO hosted by Doug & Linda Climer and Michael & Rebecca Climer. Hopefully this nasty weather will be behind us and everyone will be able to attend, please contact me or Doug if you plan to attend. This meeting will be our chapter auction following the meeting.

I hope everyone stays safe and warm out there, just keep thinking of the summer shows and nice weather and it’ll soon be here! Hope to see everyone in Springfield.

Don’t Forget – State and National membership numbers are on the address label of your Harvester Highlights.

If you should have received a pin and did not, please let us know!

John Stolee has graciously donated this quilt for the chapter auction. It was sold at a previous chapter auction and we believe it was sewn by another member.

Please bring any IH items that you would like to donate for the Annual Auction to the 1st Quarter meeting being held in Springfield.

Let me introduce myself.  My name is Judy Harrell.  I am your new Membership Secretary.  My husband is your Vice President Greg Harrell.  He joined 5 years ago, and I tagged along because I fell in love with the group and all its members.  I’ve never been a part of any organization as friendly and welcoming as the Missouri Chapter IH Group.

For those of you who have not heard Amy Perkins your former Membership Secretary unfortunately had to step down for LIFE has a way of consuming us all at different points in our lives.  Because I was able to retire early to help care for my father who recently passed away, and I don’t have little children at home to care for like Amy or a husband with cancer, I felt it was time for me to step up and be more involved with this great group.

I took over January 1st of this year and I appreciate your patients with me during this transition period.  Feel free to call, text or email me with any questions or concerns.  I would love for this transition to be as smooth as possible, but I am learning how this works as I go.  With your help, support and input I feel together we will make the transition all work out.

Anytime we have a chance to meet PLEASE seek me out and introduce yourselves to me.  I would love to put a face with all 290 members and growing.  I’m not good with names but I do remember faces pretty well.  My contact information is: